This solstice photo is a solid metaphor for 2021. Another pandemic year passed in a blur. A wild and dizzying rollercoaster ride. My snap reaction to 2021 is that it was awful. Brutal. It was. But... It wasn't all bad. I shared special time with friends in Southern Illinois. And I achieved two bucket list items on a trip to Wisconsin with my husband- I witnessed a mass bird migration (alas, geese instead of cranes) and I waded in a ... END_OF_DOCUMENT_TOKEN_TO_BE_REPLACED

Wally Funk is headed to space! Back in 1961, she was part of the secret Mercury 13 project that tested a small group of women for fitness for space travel. Despite passing rigorous physical and medical tests, isolation tests, and more, the project (a private venture, not an official NASA one) was put on hold. When funding was cut, they were summarily dismissed. They did not all go gently, but their protests did nothing to change the outcome of ... END_OF_DOCUMENT_TOKEN_TO_BE_REPLACED

My friends and I took an early June trip to southern Illinois figuring we'd see the Garden of the Gods in Shawnee National Forest, hike around, and relax in terrain that's very different than the flatlands of the Chicago area. It turns out there are so many fun things to do in Southern Illinois! With a combination of national forest, national wildlife refuges, state forest, state parks, and nature preserves there are fantastic opportunities for ... END_OF_DOCUMENT_TOKEN_TO_BE_REPLACED

Is it possible that all those hours playing Minecraft will lead your child to a lucrative career? With the right guidance, all that screen time may pay off! In partnership with our companion site, STEM Kids Chicago, we're present with Chicagoland's most comprehensive guide to STEM and STEAM camps. Whether they are in elementary school, middle school, or high school, these camps can ignite your child's passion for science and technology or fan the ... END_OF_DOCUMENT_TOKEN_TO_BE_REPLACED 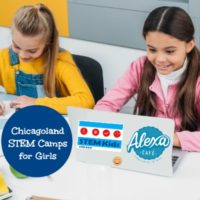 Yes, we already have an awesome Chicago STEM Summer Camp Guide, but we’re aware that some parents prefer an all-girls environment for their daughters. As Chicago’s leading STEM and STEAM resource for families, we want to make it easy to find the right girls-only option. So here's our 2020 updated guide to STEM Camps for Girls. Although several of the locations are Chicago-specific, some of the camps, like Girls Who Code Campus, are offered ... END_OF_DOCUMENT_TOKEN_TO_BE_REPLACED

If you're a longtime fan of this blog, you know that our family had a lot of school struggles. While I encourage everyone to at least try their public schools, I know they aren't always a fit. We moved our boys to a private school after it became clear that our public school could not meet my son's needs. That's why I put together this Chicago private school guide. It originally appeared on STEM Kids Chicago, and I thought it made sense to share ... END_OF_DOCUMENT_TOKEN_TO_BE_REPLACED

In January my bright, kind, beautiful son, Isaac Moldofsky, died. By suicide. He was 21. It was completely unexpected. We had no idea. He left a tsunami of devastation in his wake. He had no idea. These are my remarks from his memorial service with links added since it's on the web and all.  To reach the Crisis Text Line, text HOME to 741741 to connect with a Crisis Counselor. Be kind to yourself and those you love. Isaac was 3.5 years old ... END_OF_DOCUMENT_TOKEN_TO_BE_REPLACED