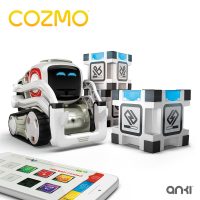 As promised in my National Robotics Week post, I’ve got a review of Cozmo (affiliate link), an adorable AI- and personality-driven palm-sized robot. Anki’s PR team sent me the product for review.

Created by three roboticists from Carnegie Mellon and designed with the input of Pixar artists and animators, Cozmo is endearing, engaging, and a bit (okay, a lot) reminiscent of Wall-E.  (If you haven’t seen it yet, make plans to do so. You will make many references to it in conversations about the future of our society.)

Like the Tamagochi and Furbies of the past, once you connect with Cozmo, you are incentivized to keep playing. However, Cozmo has the added benefit (benefit?) of AI-powered technology, a literal window into your life with its camera and facial recognition technology, and an unexpectedly adorable range of emotional expressions to keep you tied in.

Unlike those two previous addictive tech toy trends, Cozmo can teach useful programming skills. Check out the possibilities with the Cozmo Code Lab. There is a lot of fun to be had with this little bot.

I passed Cozmo along to my newest review team, Aaron and eight-year-old V, a father-daughter combo. They gave Cozmo a thumbs-up with a few reservations.

Cozmo itself is like a little remote control forklift with a Wall-E-esque face that uses simple eye and mouth animations to express a surprising range of emotions. You control it via a mobile app (Android or iOS). You use the app to control what games you are playing, fix, feed, and teach it new skills, while Cozmo reacts in many different ways.

The set includes great mini-games and some open-ended “coding” projects. It also includes three blocks that can be picked up and stacked. With the capacity to light up in several colors, Cozmo can interact and play games, chase your finger, and recognize faces. There are a lot of fun features, and enough open-ended games and projects to provide many hours of entertainment.

Both of my kids (ages 8 and 1) grew very attached to Cozmo, to the point of being a little unnerving. As a skeptical parent, I felt the main game interface seems a little like it’s grooming the kids to be accepting of IAP style mobile games (including a “currency” that powers features and lets you unlock games and skills).

The other main concern is the facial recognition, which feels a little creepy, even if it doesn’t work all that well (see V’s assessment below).  In addition to having fun with Como, the robot presented an opportunity for us to discuss how easy it is to share too much, and why a company might find it valuable to know as much about you as possible.

Privacy concerns aside, everyone loved playing with Cozmo, the animation on the face/screen is incredibly endearing, and there are many entertaining ways to spend time interacting that will appeal to a broad section of children.

An 8-year-old’s Take on Cozmo

Cozmo is a small robot. His colors are white gray, red, and black. His eyes are blue. He is easy to program. He has tiny blocks that change color. Cozmo can play with the blocks and you.

Cozmo is very cute. He is a smart robot. He can play very fun games. He only snores a little bit so it is not annoying. You can make him say things in the “Cozmo Says” settting. He will start playing games or singing on his own. You can change his voice by shaking one of the blocks in the middle of a song. The app didn’t work on my Samsung tablet, but it did on my dad’s phone.

Cozmo scans faces to remember, but he didn’t recognize me the second day.

He is very emotional, he gloats when he wins, and gets frustrated when he loses. (Editor’s note: see the video below. I’m not a fan of kids or robots who behave that way.)

I really liked playing with Cozmo, so even if they don’t fix the few small problems, he’s still a lot of fun!

You can buy Cozmo on Amazon (affiliate link).