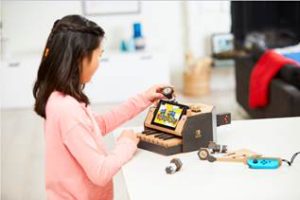 To know The Maker Mom is to recognize that I’m not a fan of video games, but I just received news about the new Nintendo Labo. It adds an exciting Maker element and a new level of interaction to Nintendo Switch games. At first glance, Nintendo Labo seems similar to the Makey Makey, but without wires. Just as my son created a way to bring real-life elements to MineCraft with his Makey Makey, Nintendo Switch can be used with Joy-Con controllers and special new kits to create what they call an interactive Toy-Con. This post contains affiliate links.

Take a look at how the system combines real-life with gaming fun.

They’ll be releasing their first two Toy-Con kits, the Variety Kit and the Robot Kit on April 20, 2018. Of course, the real fun will begin after your kids ditch the kits and start designing their own Toy-Cons! Tape and cardboard will work just fine, but I can also envision some interesting opportunities using 3D printers and laser cutters. Kits are always a good way to get started, though.

More about the Toy-Con Labo kits from Nintendo’s press release:

Each Nintendo Labo kit packs plenty of value, with a range of ways to make, play and discover in each kit:

·         Toy-Con RC Car: Insert the Left and Right Joy-Con into your newly built RC Car and control its movement using touchscreen controls on the Nintendo Switch console. The HD Rumble feature in the Joy-Con controllers will cause vibrations that move the car in the direction you choose. Materials to construct two RC Cars are included.

·         Toy-Con House: By inserting various assembled blocks into openings in the sides and bottom of the House, you can interact with, play games with and feed a cute creature on the front-facing Nintendo Switch screen. Each differently shaped block is detected by the IR Motion Camera on the Right Joy-Con inserted on top of the House.

·         Toy-Con Motorbike: Insert each Joy-Con into an assembled set of handlebars to drive a motorbike on the Nintendo Switch screen. Pressing the ignition button starts the engine, while twisting the right handle activates the throttle. Leaning your body or turning the handlebars left and right controls the motorbike.

·         Toy-Con Piano: After assembling a beautifully crafted 13-key piano and inserting the Nintendo Switch console and Joy-Con, you can experiment with your own musical creations by pressing different keys. You can even insert different assembled knobs to create new sound effects and tones!

·         Toy-Con Robot: Create a wearable Robot suit, and insert the Left and Right Joy-Con into the designated slots on the backpack and visor to assume control of the robot, which is shown on the TV when the Nintendo Switch console is docked. Enjoy a variety of fun game-play experiences, including Robot mode, in which you can destroy in-game buildings and UFOs.