I just returned from an amazing family trip from Yellowstone and several other National Park (details soon!). I saw bison, bears, deer, wolves, longhorn sheep, pronghorn sheep, mules and more! I have the mental images detailed in my mind, but the actual photos? Meh. So I was excited to have the chance to talk with National Geographic photographer Joel Sartore thanks to my ongoing work as a Wildlife Ambassador with Dawn Dish Soap.

In addition to serving in the enviable role as a National Geographic wildlife photographer, Joel is also known for his biodiversity project, The Photo Ark. The Photo Ark is an ongoing effort to document endangered species that are under human care. Don’t click until you’ve read the interview because you will get lost in his amazing collection of 6,5000+ photos.

I just returned from a visit to Yellowstone National Park. I enviously eyed people with telephoto lenses as long as my arm, but alas only took shots with my cell phone. Can you share a few tips for people like me?

The keys to making good photos with any kind of camera or lens are thoughtfulness and patience. First, research your subject and know what you can or can’t do in terms of getting close, filling the frame with your subject, and capturing a nice moment in an interesting way. Second, stick with it! The difference between a good photo and a great one is often a matter of being there when there’s something great going on, and in good light.

You mention that you have the scars to prove your history as a longtime photographer for National Geographic. A favorite song of mine notes that scars are “a map of the adventures and places you’ve been.” Can you share a story behind one of the scars you acquired on the job?

My ‘best’ scar is on my lower right leg. It’s roughly circular, the size of a 50 cent piece, and numb since the last surgery to clean it of the damage caused by a flesh-eating parasite that tore into me while documenting the Bolivian Amazon for NG. The disease, injected by a sandfly, was leishmaniasis, and it was trying to move through my body to eventually eat the soft tissue out of my head. This would have been bad in myriad ways. The treatment was a daily, hour-long IV, inserted into the top chamber of my heart rough a pic line, containing antimony, a heavy metal that disrupts the parasite’s life cycle. It is served cold each day, for one month.

Your portfolio is captivating. Going through it, I noticed some pictures of birds being rescued from an oil spill. I’ve gotten more perspective on that through my work with Dawn. What was that shoot like for you?

Heartbreaking, actually. The animals don’t really know what’s going on when they’re covered with oil. They just know that they’re trapped, vulnerable and highly stressed. And if they’ve ingested much oil, they could be dying as well.
​
Taking those pictures left me sincerely hoping that people would slow down and not take such huge chances with the environment in the name of greed. We all have to live on this planet, not just wildlife.

Taking photos of animals on the verge of extinction could be depressing, but you seem like a hopeful guy.What keeps you going?

Every animal to me is an inspiration. I care deeply for all of them, and I’m often the only voice they’ll ever have, especially for the ‘least among us’, the little creatures that live deep in the forests, in the water or underground. This is their chance, and I’m here to give it to them, to be heard, loud and clear. It’s a big responsibility, and an honor. So when we lose a species, it both saddens and inspires me to do even more to prevent it from happening again. 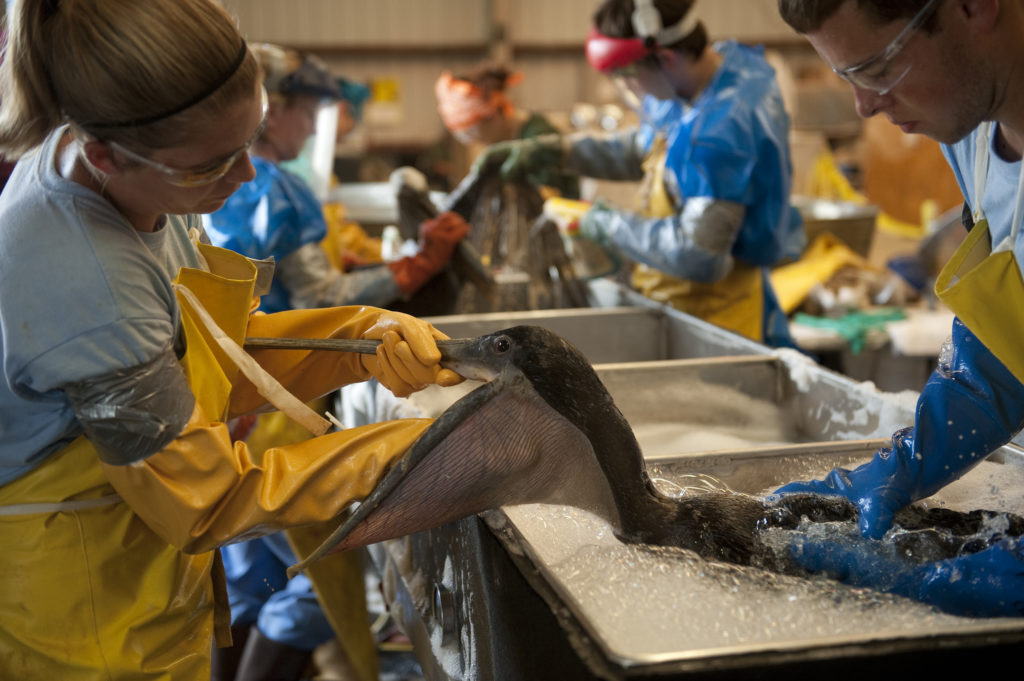 What advice do you have for aspiring wildlife photographers or their parents?

I’d say everyone should go into it with their eyes wide open in terms of it not being a very good way to make a living. There just aren’t a lot of publications that pay a living wage to shoot any kind of photos, let alone the nature photos that thousands of people have now taken up as a hobby. In other words, go for it and have fun, but don’t quit your day job.

Anything else you want to mention?

Yes. All of us can make a real and lasting difference if only we try. Here are a few simple ways to save species:

1) Quit putting chemicals of any kind on your lawn. That includes fertilizer. All chemicals end up in the water and not only is nature harmed by these poisons, but we are too. Mulch your grass by the way (don’t bag it and have it hauled off) because those clippings serve as natural fertilizer and aid in moisture retention for your lawn, to mention the extra fuel and carbon it takes to haul the clippings off to a landfill somewhere.
2) Be smart about your carbon footprint. Is your home insulated well? Do you own a small car, and drive it less? And how do you spend your money? Do you buy items that are made sustainably, and delivered to you in recyclable or (better yet) reusable containers?
3) Tell your friends and neighbors that you care about what happens to other species. Vote accordingly, and hold politicians accountable for what happens to our climate, our land, and our waters. And remember, what happens to other species, will eventually happen to us.
Want to hear more from Joel? Listen to his 2017 interview with Terry Gross on Fresh Air and check out The Photo Ark or buy his new book (affiliate link).