It seems like only yesterday I announced the 2016 Future City competition topic, and now the season has come to a close. I wasn’t able to attend the finals in Washington, D.C. this year, but I was hired by the Future City sponsor, DiscoverE to coordinate a few bloggers to write about the event and wanted to share their observations.

Future City is an engineering competition for middle school students. It engages, their hearts and minds as they research engineering topics, urban planning, create a narrative of and promotional materials for their city and build a virtual model of their city as well as a physical scale model out of recycled materials.

The students build physical models with recycled materials on a $100 budget, but the models were especially fitting this year as the challenge topic, Waste Not, Want Not, was managing solid waste. As blogger Anne wrote, this “challenged the participants to imagine creative solutions for the Four R’s of waste management, Reduce, Reuse, Recycle, and Rot.”

This team from New York took the message to heart by fashioning and donning outerwear made from upcycled materials.

Thien-Kim from I’m Not the Nanny observed, “Besides waste management, students designed living spaces, green transportation, clean energy, work spaces and even museums and churches. They put a lot of thought into their cities and models. Some models even had lights, fans, and moving parts!” 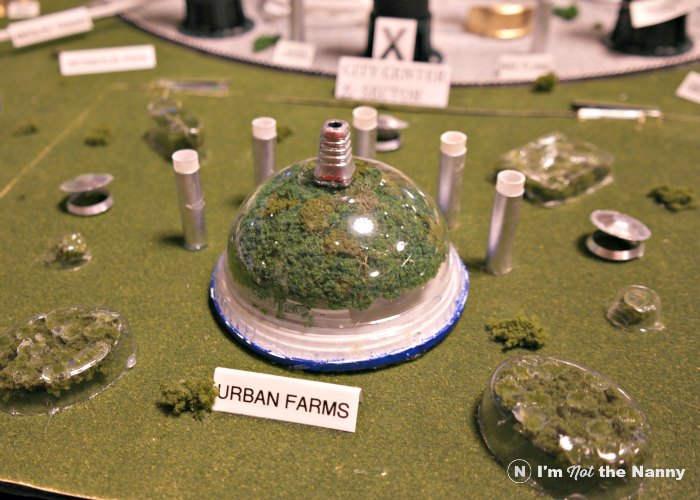 Leticia noted that Future City provides opportunities for students to “apply their engineering, design, and project management skills to a real world problems.”

Natalie from Planet Smarty Pants was home in California during the finals, but shared some thoughts about the competition and her perspective as an engineer who hails from a long line of engineers.

Laura attended the Future City awards ceremony with her kids. She captured the shocked faces of the first place team as they received their good news, and wrote that “both kids were imagining what it would be like to form teams of their own for next year” on their trip home

One thing I really appreciate about Future City is the low barrier to entry. It only costs $25 to register a team. It also seems to attract a lot more girls than other types of engineering competitions. If you’re intrigued, click to learn more, so that you can lay the groundwork to hit the ground running late next summer when the 2017 challenge is announced. Besides, in addition to all the great STEM learning, you could win a trip to Space Camp for the team and $7,500 for your school’s STEM program.