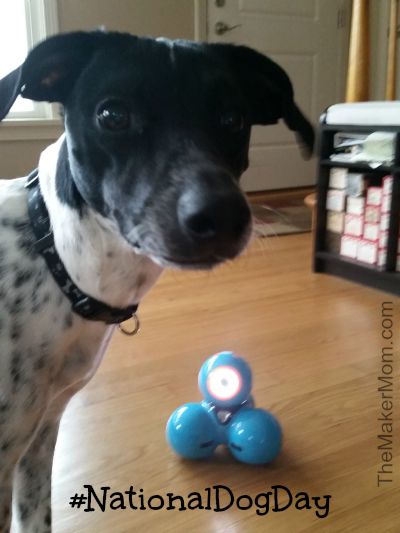 Tesla and Dash, the robot.

Tomorrow, 8/26, is National Dog Day. Admittedly, it’s not the kind of special STEM day or week I typically call attention to, but it’s a fun jumping off point for science exploration. It’s also a chance to share exciting news–for next couple of months, I’ll be writing a weekly guest post over at the Young Scientist Challenge blog. I’ve hosted STEMchats and written about the Discovery 3M Young Scientist Challenge in the past. Now, I’m adding educator-friendly content to their blog.

Science Dog-gone It!, my latest post on the YSC blog, shares practical ideas on how to use National Dog Day to talk about genetics, psychology and more. You can also read how the family pet played an important role in the research projects of two recent Young Scientist finalists.

This morning I was so excited to catch a tweet from Caren Cooper (@CoopSciScoop), citizen scientist extraordinaire, announcing a #CitSciChat, Citizen Science Chat, just for National Dog Day. Look for #CitSciChat chat on Twitter on Wednesday, August 26, 2015 at 2 PM Eastern.

Tesla in his Thinking Chair.

What started as a research project appears to have become a paid service that sounds somewhat intriguing, Dognition. For about $20, you can begin to understand your dog’s cognition style. I took several animal behavior classes as an undergrad and used to joke that I was going to be an animal psychologist. But that could have been a thing, apparently.

However you mark the day (no pun intended, but believe me, Tesla certainly will), give an extra hug to your furry friend in the name of science.