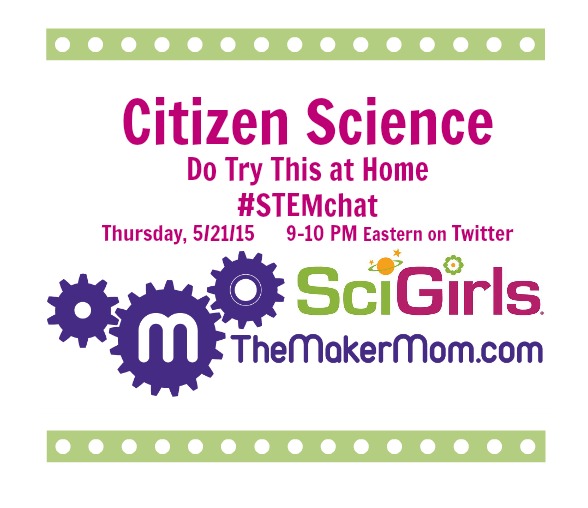 I’ve barely caught my breath from the last #STEMchat and suddenly it’s time for another one. #STEMchat is usually a once-a-month affair, but when I was approached with the opportunity to collaborate with SciGirls, I couldn’t pass up the chance to work with the inspiring and educational Emmy Award-winning series on PBS KIDS.

As the SciGirls track toads and count clouds, they also hope to inspire SciGirls (and SciBoys) to join the citizen science movement. Citizen science invites children and their families to make key observations as well as record and share data on large-scale research projects run by real scientists. It’s a fun way for the entire family to participate in the scientific process. Some citizen science projects run for so many years, that participation in them can easily become a family tradition.

Speaking of families, PBS Parents has a bunch of STEM-sational resources, including an overview of SciGirl episodes and extension activities you can do at home.

We’ve got an awesome panel of grown-up SciGirls to help lead our #STEMchat on Citizen Science:

@SciGirls, SciGirls is an Emmy Award-winning PBS KIDS TV show, website and outreach program that seeks to change how girls think about STEM.

@CoopSciScoop, Caren Cooper, a bird-loving biologist and blogger who is literally writing the book on citizen science.

@VeronicaEye, Veronica Arreola, a nationally-recognized professional advocate for girls and women in STEM who is also a speaker and writer. Read her STEM Girl Friday feature.

And me, @KimMoldofsky, also known as The Maker Mom and founder of #STEMchat who has yet to author a book. You might also follow me at @STEMchat, which is my default account if I land in Twitter “jail.”

Spread the news to your STEM-loving friends and colleagues. Share the #STEMchat joy with these sample tweets!

*Join me for #STEMchat on Twitter 5/21 at 9 PM Eastern to talk #CitizenScience with @SciGirls http://tinyurl.com/May21STEMchat

Sign up here to receive a free email reminder about #STEMchat the day before our chats, as well as news from The Maker Mom.