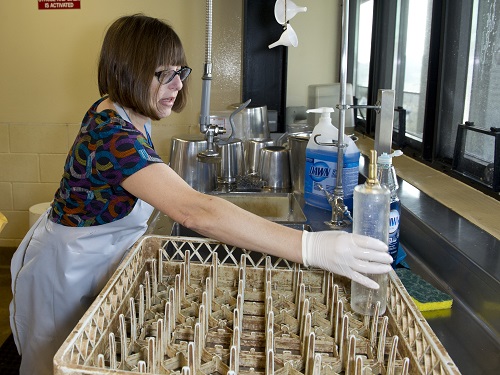 October 4 is World Animal Day and thanks to Dawn*, I got an up close view of two great organizations that make a difference in the lives of wild animals during the #DawnDayintheWildlife blogger event. When I first got the invitation to visit The Marine Mammal Center (TMMC), a wildlife rescue and rehab operation in Sausalito, California, I hopped over the Charity Navigator to make sure they were a legit organization. In hindsight, it was an almost comical move because TMMC has just a few of dozen employees and more than 1,000 volunteers who rescue and care for anywhere from 800- 1,400 animal each year. Many employees also volunteer on their days-off.

My day at the world’s largest marine mammal hospital was informative, interesting and inspiring. In addition to Dawn’s work with and support of TMMC, we also learned about the brand’s work with International Bird Rescue. Many of us have images burned in our minds from news footage of birds being cleaned with Dawn after the Exxon Valdez spill or, more recently, the mess caused by BP’s Deep Horizon oil spill.

Back in 1978, Dawn was first identified as the best soap for cutting oil from bird’s feathers in the timeliest manner. Later testing (1990, 2000, 2006) also confirmed Dawn as the soap of choice, safe for birds and volunteer cleaners, alike. Dawn continues to support bird clean-up efforts by donating product to aid in bird rescue all over the world.

Although I didn’t see any sea lions washed with Dawn, I did notice plenty of other stuff at TMMC get scrubbed with it. As you’ll see in the video below, there are a lot of tanks (hospital rooms), crates (bigger than the one you use for your dog) and a big, fishy kitchen, not to mention lots of utensils and prep equipment (I’ll tell you about the fish milkshakes in a future post) that get a good cleaning with Dawn. The volunteers even wash down the kitchen walls! As you can see above, in order to give my group a true taste of TMMC, they put us to work for a while.

I got do other stuff there, too. I’ll be back with more details about TMMC as well a STEM Girl feature based on my time in the lab with Gretchen McIndoe, the volunteer microbiologist featured in the video. I’ll even share my view examining sea lion blood in the lab microscope. It’s cool stuff!

Want to get a feel for what it’s like to rescue and release an animal? Dawn gives you a virtual peek. As you saw in the video above, one of the many surprises during my time with Dawn was the chance to watch three sea lions return home to the ocean. More about that in a future post, too.

Dawn provided me with travel and other compensation in exchange for serving as a #DawnDayintheWildlife Ambassador.