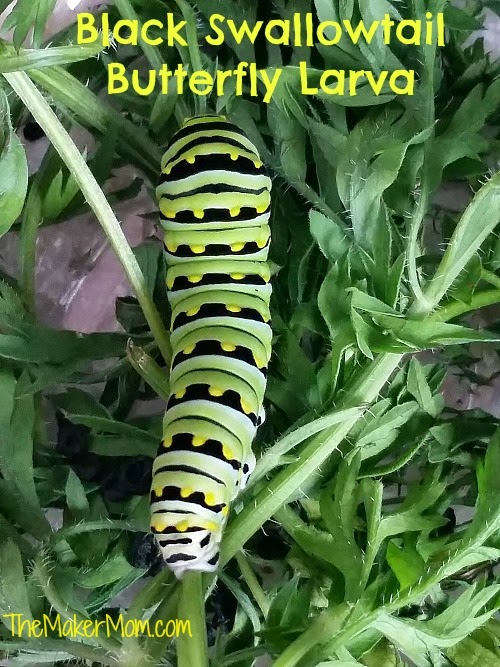 I found the largest caterpillar I’ve ever seen in nature hanging out on the carrot greens in our garden last week. It was close to three inches long. My husband has been working hard on our his garden and I wasn’t about to let some critter ruin his efforts. At the same time I was intrigued by the striking green, black, white-striped, yellow-dotted larva and wanted to learn more about it. It looked a bit like a Monarch larva, but those feed exclusively on milkweed. Google and a few friends helped me determine its true identity-a black swallowtail butterfly caterpillar or larva.

I plucked it up and made it a cozy new home in a plastic container filling it with a couple of twigs and a handful of carrot greens, which I refreshed on a regular basis. I snapped a couple of shots on my new phone (a Samsung Galaxy 5 -not sponsored, FYI) impressed by the clarity and quality of the photo.

It’s like I’m stilling living in the year 2000 or something. I can’t believe my cell phone can take such good photos!

And then I was saw my little friend munching around, I thought I’d use my phone to capture the moment on video. I focused in on the caterpillar, rested my phone on the lip of the container, pressed record and walked away. I captured nearly 15 continuous minutes of it chowing down on carrot greens.

Interestingly, I also captured a bit of housekeeping, as it clear its poop from a nearby spot at the bottom of the jar. You’ll find that part about 13:30 into the video.

Given its size when I found it, I figured it was done molting, or in its last instar (larval stage) and I was right. Yesterday, with two tiny, almost invisible silky threads, it hung itself on the larger twig. It seemed to be shrinking, its colors fading. By evening it had morphed into a chrysalis. It should remain in the pupal stage for about 2-3 weeks, so stay tuned for big news!

It was much less exciting than watching a silkworm spin its cocoon, but still pretty wondrous. 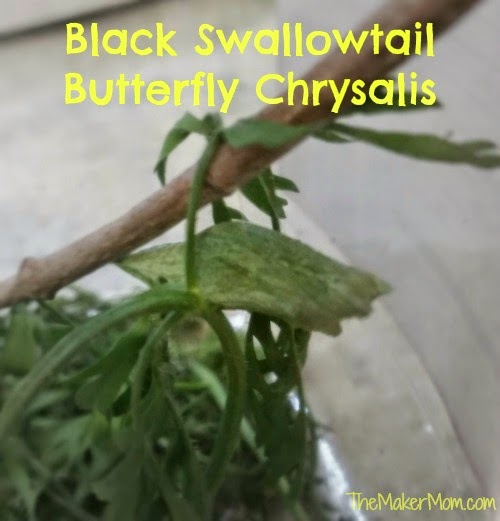