One of the reasons I enjoyed last summer’s Mini Maker Faire in Evanston was that I met so many great people. Kathryn Born, author of today’s guest post, was one of those amazing folks. She’s a writer, consultant and entrepreneur based in Chicago.

The computer program began with a mom who got her child a Mindstorms Robot, looked at the directions and had no will to figure the thing out. Her child was 8 at the time, had been diagnosed with Asperger’s, and had showed an aptitude for computers. So she took out a CraigsList ad, and found a teacher named Hans Sittler.

Hans came to the house, sporting a white beard and glasses, and attempted to try to teaching the child – who, by the way, had been tossed out of a mainstream school and was plopped into a restrictive “behavior disorder” environment. The child immediately declared to Hans that he has no interest in a robot. Hans simply said, “I have a special laptop that runs the Linux operating system. Do you want to see it?”

The green screen, the dull lines of code, the dreariness of networking computers…the sparkly, intuitive robot just couldn’t compete. The two guys spent the next three hours writing code, setting up a router, and networking every computer in the house. Hans was hired.

Over the next few weeks, the child’s confidence soared. He referred to himself as a programmer and felt himself to be a part of a special community of like-minded thinkers. Tragically, Hans died of cancer just months later, but by then he had lit the spark. Hans had formed a small class with 3-4 other kids – teaching them a programming language called Python. Everyone involved could feel something amazing had been discovered.

All this time we were focusing on what kids with Asperger’s couldn’t do, and for once, focused on what they could.

They were like goldfish that had been flopping around on the carpet, and were suddenly put into the water where they swam gracefully in their proper environment. In a binary world, they were elegant, talented, and the things that perplexed others came to them with great ease.

After hearing about this group, I came to observe one of the library sessions. I could immediately see the potential, and without Hans, the program needed a new home. Have Dreams (an Evanston, Illinois not-for-profit) was thrilled to adopt the program and support it with their autism-centric infrastructure. The HFA (high-functioning autism) kids meet every Tuesday at 4:15 for a social curriculum that includes time in the computer lab.

After almost two full years, we’ve hit a stride. We’ve explored a lot of software system with the students: tools ranging from MIT’s Scratch, Greenfoot, Star Logo and even Google Sketchup. Brian Myers, who had been running “Gamemaker Academy” came on as an inspired, talented teacher and over time he’s created a calm, stress-free space that provides both individualized and group instruction. For some participants, the “hard core” pre-Java programming just isn’t a match, so for they’re designing websites in Weebly and focusing on pragmatic computer skills. 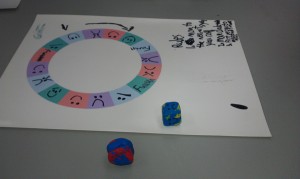 Over the summer, Have Dreams hosts a special 2-week camp in August. We get lofty in that program – as we have a full three hours to do both technology and analog game design. Game design, like other software teams in the professional world, requires everyone to have a role, so we’re excited about some kids focusing on audio special effects (Foley), some on character design, etc. As all the parts come together, we plan to weave in organized social interaction in discussion and negotiation as we figure out the game mechanics, rules and look and feel of the game itself.