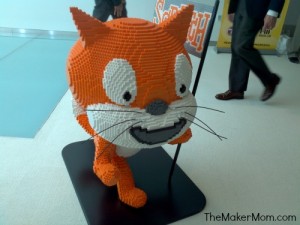 I went in determined to take good notes, so that I could write-up a rich summary. About five minutes in to the morning Think Tank, I caved and just started Tweeting out the juicy bits. And two weeks later, I can’t seem to access those Tweets. Blerg.

The Think Tank conversation twisted and turned and spiraled back upon itself.

The very large discussion panel was comprised of educators, administrators and education professionals, representatives from afterschool programs, and a handful of students. Overall, the group was white and male, which was a shame.

When I hear someone say that modern technology is so disruptive that they can imagine a time when a school building itself will be an anachronism, I want to point out that kids under the age of, say, 10-12 years old don’t care for themselves and that with many families in households where two parents work full-time, someone needs to be caring for the kids during the day. I think a panel with more women on it would have pointed out that issue. (Same with the comment about the upcoming presidential election being “all about” the economy and job issues. Hello, I have a uterus and a brain and I vote.)

Technology in the Traditional Classroom

When my boys’ school got smart boards, high-tech white boards with internet capabilities, it opened up a whole new world. Suddenly, my boys came home talking about the latest kitty videos on YouTube (true story) and I’m sure there were other benefits.

As the classroom “art mom” I realized that I no longer had to spend time in the stuffy, disorganized room where the collection of artful posters were kept. I could choose any artist whose work I could locate online and even find music inspired by the artwork or interviews with the artist, load the links onto a flashdrive and I was set for a fabulous presentation.

During one of my monthly visits, I told them I was talking them on a field trip. The initial excitement eased a bit when I told them it was a virtual field trip, but still, thanks to the Google Art Project, I unlocked the door to some of the world’s best art museums and encouraged them to visit often. For free!

Thanks to teachers who embrace technology, my tween, never one for making posters, was able to make a Scratch presentation, which not only allowed him to learn about his topic, but to build computer programming skills at the same time.

But not all teachers embrace technology. I mean, enough do that neither of my boys can sign much more than their name in script because they usually type their reports, but there’s definitely a digital divide between teachers and students. Only the newer teachers are digital natives. No doubt there are a whole lot of teachers who remember the excitement of the early green screen gems. Indeed a Dell study (see the infographic below and the full study here) indicates that 63% of US teachers feel their students know how to use technology better than they do.

Interestingly, 71% of students say they have more advanced technology at home than they do at school. This issue came up in the Think Tank discussion. Schools often set their technology budgets and plans in a five-year cycle, but technology evolves so quickly that a five year plan is impractical. What is a school to do?

But attaining the technology and training teachers to use it is only part of the challenge, teachers need to learn how to integrate the technology into the curriculum for the biggest educational impact on student learning (see note about kitty videos above). No doubt blended learning (traditional instruction plus technology) is the wave of the future, but we need to find best practices for doing this.

Social Media in the Classroom

Yikes! The Dell study sampled opinions of parents, teachers and students (200 of each) in the US, Germany and China. When it came to social media in the classroom, the Chinese were most open to the idea. They other respondents did not embrace the social media in class.

There’s an ongoing debate about whether our high school should unblock Facebook for students on campus. Students say, “yes,” and apparently they’re saying it loud enough that the administration is “considering it.” To which this parent responds, “WTH?”

At the Think Tank, the pros and cons of this issue were discussed, as were some of the thornier related issues. When a teacher is connected to a student on a social network what is a teacher’s role and responsibility when that student shares disconcerting/deeply personal/harmful/illegal thoughts or actions? And if you’re dealing with teens, let’s face it, there’s going to be a whole lot of all of the above. As a teacher or administrator, I’d want to keep far away from this.

Then again, when I was in elementary school, we used to have teachers over for dinner. Once, my brother and I even slept at our gym teacher’s house! And we were not molested!

How Students Use Technology at Home

{Pause to talk to school social worker about issues related to my son and his school-issued netbook. Uncanny timing, right?}

According to the Dell Study, students in all three countries report that their main use of “home devices” (which I’m taking to mean computers) is for school work. That is 73% of respondents said they use it for school work and 65% saying they use it for gaming. This surprised me until I noted that there is a margin of error of + or – 4%, which kind of evens the playing field.

How Parents Use the School’s Technology at Home

The ability to communicate with the school online: to track homework, grades, attendance, track lunch account balances and pay fees, is one of my favorite technological advances. And I appreciate that my high schooler’s teachers are generally quick to respond to emails from him, sometimes even at night.

In fact, my teen’s math teacher recently did some sort of evening online test prep, which my son eagerly tuned into dinner break (for the teacher) and all, but I guess my boy didn’t realize he was supposed to work along with the teacher and not just watch him like a math reality show.

Or maybe he clicked away to his games whenever my husband stopped looking over his shoulder. I’m not sure.

Regardless, the boy did not do well on his test.

And I think that’s kind of the point of this all. Technology in the classroom and at home can be an awesome boon to learning and I believe it will change the face of education as we know it, but we can’t just play with our shiny (pricey!) new objects, we’ve got to figure out and implement best practices.

Our digital natives are going to blaze exciting new trails and change the world. (If they can ever stop playing MineCraft.)

My trip expenses were covered by Dell. I brought along the Dell XPS13 I received as part of the program. It made an ideal traveling companion, fitting as nicely on my lap as it did on the tray table of the airplane seat.