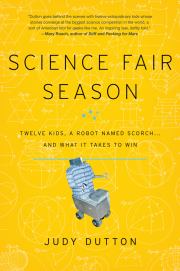 I recently picked up Science Fair Season from a local library and brought it on a family trip. You know how that goes. The book sat in my bag the entire time. I was delighted when I saw a review of the book on my friend Adrienne’s blog and even happier when she gave me permission to repost it from Baby Toolkit. Adrienne also blogs and podcasts about family games.

At first blush, Judy Dutton’s Science Fair Season: Twelve Kids, A Robot Named Scorch. . . and What It Takes To Win

recast with science geeks.  Don’t be fooled.  While Science Fair Season explores the lives of a handful of contestants in the Intel International Science and Engineering Fair, it deftly illustrates artful parenting and success in learning as well.

The high school students’ projects are sometimes mind-boggling in scale (like building a reactor for nuclear fusion).  I expected the top achieving high school students to be working on an undergraduate level, but these noteworthy projects more clearly resemble post-graduate research.  Because the students approach their inquiries with fresh perspective, they see possibility and challenge where more conventional researchers might not explore.

While no two contestants’ stories are remotely identical, patterns do emerge that speak to science education and parenting young children.  So often the students’ stories begin with an early spark of interest in something (horses, electricity, cars, astronomy) which parents encouraged with exploration.  Though the kids’ interests didn’t usually mirror parental interests, the parents went out of their way to feed their child’s curiosity and enthusiasm.  Time after time, parents provide opportunities (like a homebrew chem lab, a borrowed Geiger counter, or time with horses) and find mentors with similar interests.  Granted, not every child is going to become a super-competitor in science by the mere magic of parental support, but these stories clearly illuminate a parent’s ability to multiply interest into inquiry and fascination.

Yet the book is not populated with Tiger Moms or Stage Fathers, the burgeoning interests are consistently directed by the kids (and I say kids because this explosion of interest seems most common in early childhood).  These biographies are full of freedom and exploration.

The other looming discussion is that of how students come to love science learning.  Halfway through the book I became painfully aware that, although some “outsiders” come to science interest in junior high or high school, most of the kids with scientific fervor (and the resulting knowledge) fully embraced science long before most schools begin to seriously teach it.  We, as a nation, are missing the critical window where kids fall in love with science.  Thanks to budget cuts and lack of advocacy, science is barely taught when young students are making decisions about what they love.  When schools finally start teaching science in junior high, the approach is often dry and makes the very foundation of existence seem irrelevant and esoteric.

During the space race, science charged into unsuspecting homes through popular media.  While the media marveled and quaked at Sputnik, rocket scientists became the heroes of coal mine town boys like Homer Hickam (NASA engineer and author of Rocket Boys

).  This book reminds me that not only are science heroes present today, they’re still coming of age (though in increasingly shorter supply).  Our tech role models need to be more than wealthy boys with killer apps (Apple’s Steve Jobs, Facebook’s Mark Zuckerman).  Kids would be better served to know about Pluto Files

In my life as a university academic advisor, the most frustrating academic trajectories were those of students with no real interests. A student sorting through an abundance of passions brimmed with energy, but one without a single definable interest made me want to bang my head against my desk.  I knew then that, should we ever have kids, I wanted them to deeply love something that challenged and expanded them.

Science Fair Season left me with a long to-do list.  I want Ranger, Scout, and the Detective to gain exposure to math and science beyond what they’ll get in the elementary classroom, and I also want those opportunities to be available for their friends and classmates.  My mom’s fifth grade class had this amazing interactive experience put together by an orthopedic surgeon dad; the dad set up hands-on stations where the class could use real orthopedic tools to meet objectives (like screwing a nut on a bolt) through obstacles (inside a bottle) to simulate surgical challenge.  My mom believes that one presentation converted more students to science than any other single event of her long teaching career.  This it the type of early experience I want for my kids and as many other kids as we can involve.

I think the future, not just of our kids’ educations, but of the country and the world, may lie in the opportunities we offer our kids in their early years.

and The Farmer’s Wife

, but it also has the seeds of one of the most critical educational discourses of our generation.